i inspired to created this small Athena’s statue from the great Athena’s Statue of Propileans ( to the entrance of Acropolis – Parthenon 5th century bc). This great statue was dedicated to the protector of the city of Athens and made by the Leader of Athens , Periclis !

the stutue as every creation of us created in our workshop  with care , respect , love to art and culture of  Greece / Crete!

Athena is an ancient Greek goddess associated with wisdom, handicraft, and warfare who was later syncretized with the Roman goddess Minerva. Athena was regarded as the patron and protectress of various cities across Greece, particularly the city of Athens, from which she most likely received her name. She’s usually shown in art wearing a helmet and holding a spear. Her major symbols include owls, olive trees, snakes, and the Gorgoneion.

The statue was 100% handmade in our workshop by the ancient method of casting bronze , which was used by the Minoans 5.000 years ago.

Guaranteed for a lifetime!

There are no reviews yet. 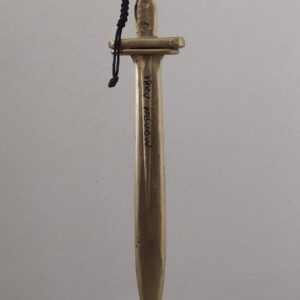